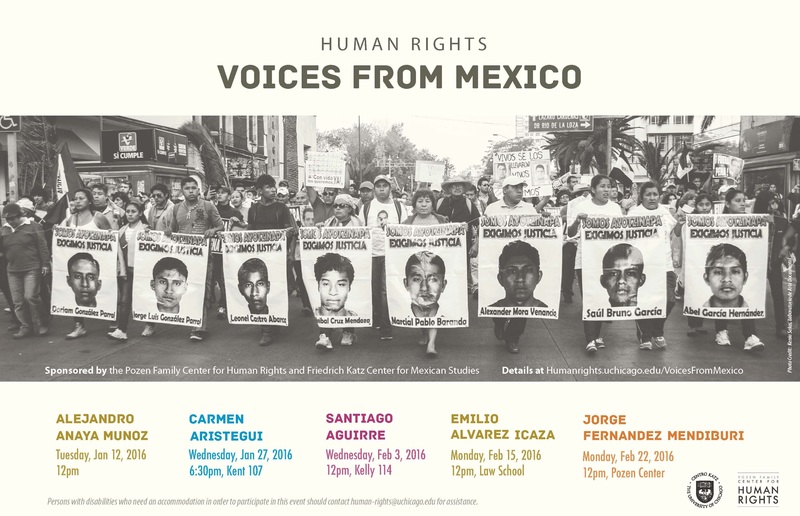 How did Mexico, the new showcase of democracy at the beginning of the millennium, arrive at such a situation?  What is the way out?  What can the people and the government do? The University of Chicago has been hosting a series of speakers and events in Winter Quarter 2016 to bring the discussion of these questions to Chicago.

This series was sponsored by Pozen Family Center for Human Rights and Friedrich Katz Center for Mexican Studies.

A highly respected journalist appears weekly on her own show on CNN En Espanol and writes for Reforma and other media outlets. Her March 2015 dismissal from MVS Radio, where she had a daily morning show, was widely protested by Mexican and international journalists and human rights organizations. Carmen Arisegui addressed a crowd of 400 people at the University of Chicago's Kent Hall. View her talk here (in Spanish).

Aristegui also spent an afternoon at Chicago's WBEZ, speaking with Jerome McDonnell on Worldview. Listen to the interview here (in English).

Attorney with the Centrol Miguel Agustin Pro Juarez de los Derechos Humanos, Mexico, D.F. Aguirre is part of Centro Prodh’s legal team coordinating a nation-wide coalition of family members and human rights organizations that demand answers regarding the over 26,000 Mexicans who have “disappeared” in the past decade.

Executive Secretary of the Inter-American Commission for Human Rights, the official human rights body of the Organization of American States. Alvarez Icaza had a long history in the human rights movement in Mexico before being elected President of the first government Commission of Human Rights of Mexico City which he directed from 2001-2009. Alvarez Icaza was elected General Secretary of the Inter-American Commission in 2012 and has since conducted investigative mission across Latin America.

Attorney with Indignacion, an NGO in Yucatan, Mexico, Fernandez represents a Mayan agricultural cooperative in its battle against the Monsanto company whose experiments in genetically-modified plants have contaminated the Mayan’s organic honey and destroyed their access to the European market.

Gustavo Mohar served as the head of Mexico's national security intelligence agency (CISEN). He is currently a consultant on security issues and immigration policy. He spoke to Jerome McDonnell about organized crime in Mexico and the U.S.We also discussed immigration. Mohar believes there are alternatives to “building a wall”. He gave a supply and demand labor history on immigration that demonstrates periods where labor demands were met successfully. Hear the full interview here.