The World Reimagined: An Interview with Mark Bradley, Part 4

This is the final installment of an interview series we've been doing this week. We're talking with Mark Bradley about his recent book, The World Reimagined: Americans and Human Rights in the Twentieth Century (Cambridge 2016). You can read the prior posts here: Part 1, Part 2, and Part 3.

LW: This book is full of rich expositions of visual and auditory culture. You start with descriptions of two fascinating events in 1949 that celebrated the rise of human rights, and the Universal Declaration in particular: one, a UNESCO exhibition in Paris that opened in October of that year, and the other, a Carnegie Hall concert celebration in December. There are many more discussions of music, art, photography (not to mention literature) throughout the book. Tell me how you started to gather this material.  Did you set out to look for it?  Did you stumble upon it?

Mark Bradley: Yes, and no.  As I began this project, from the standpoint of method I was keen to think about how the visual might not so much illustrate arguments made through texts (as it most commonly does in so much history writing) but operate along side or apart from texts to do political and moral work in and of itself.  Coming into it, I was deeply influenced by Lynn Hunt’s approach to epistolary novels as essential to understanding eighteenth century French rights talk and to my colleague Martha Nussbaum’s larger claims about how imaginative works offered a field of moral knowledge that more traditional political and legal texts simply cannot provide.  Given the centrality of the visual in the twentieth century, I wondered how photographs and moving images might have played similarly important roles in structuring the affective frames through which human rights became believable.  So in a sense, yes I was looking.  But I never anticipated at the outset the central place visual and imaginative texts would ultimately play in the larger arguments I make in the book.  In the 1940s, depression era photographic reportage like that of Dorothea Lange, Walker Evans, and Margaret Bourke-White emerged as absolutely central for mid-century Americans in making sense of what was a still inchoate thing increasingly called human rights.  Similarly in the 1970s, how Americans read works like Solzhenitsyn’s Gulag Archipelago or paintings by Leon Golub that graphically depicted incidents of torture were at the heart of the testimonial turn that shaped apprehensions of human rights in that era.

Cultural forms also helped me understand the extent to which the very notion of human rights were an importation into American domestic space.  In a more exceptionalist reading of American engagement with human rights politics, the United States is at the center of these processes and human rights thought rendered as the exportation of American rights talk out into the wider world.  The reality is more complex, with the United States far less of a prime mover than is commonly thought.  The global human rights moment of the 1940s was co-produced by a variety of actors, Americans among them.  Visual reportage like that of Lange and others, too often seen as a uniquely American phenomenon, was in fact part of a broader transnational practice.  Even more dramatically, in the 1970s, I argue that Americans essentially came to human rights last (yes, last), long after they were embraced, and given shape and form, by dissidents and activists elsewhere the world.  Human rights operated everywhere as a guest language, producing a variety of local vernaculars.  For Americans, the meanings of human rights as they emerged in U.S. cultural politics in the 1970s were deeply shaped by encounters with dissident literature from the Soviet East, a variety of visual and aural testimonial practices from Latin America and the importation of human rights discursive practices first pioneered far from American shores by Amnesty International and the era’s growing number of non-state human rights advocates. 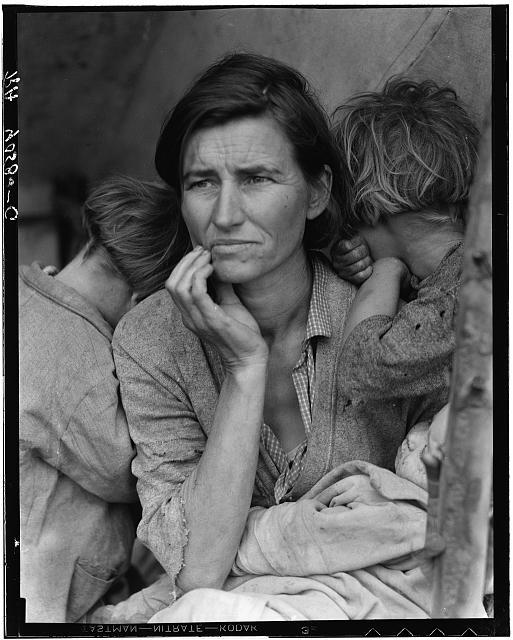 Migrant Mother (1936), a photograph by Dorothea Lange, is probably the most familiar example of depression-era photographic reportage.