The Human Rights Lab is pleased to announce our Lab and Mass Incarceration Working Group (MIWG) Fellows student team for the 2022-23 academic year.

In partnership with the Center for the Study of Race, Politics and Culture, we established a fellowship for undergraduates to play a leadership role in the Mass Incarceration Working Group. We’re excited to announce our team of Mass Incarceration Working Group Fellows: Taji Chesimet, Yazud Brito-Milian, Brianna Suslovic, Orlando Mayorga, Durrell Washington and Tommy Hagan.

We are also delighted that Indigo Wright will continue their work as a Special Projects Fellow and Chioma Nwoye will work with the Lab as our Programming, Multimedia and Marketing Assistant.

Read more about each of our fellows and the exciting work they are doing.

MIWG Justice Fellow | Yazud Brito-Milian (they/them)
Yazud Brito-Milian is a fourth year at the University of Chicago studying Creative Writing and Critical Race and Ethnic Studies. Yazud is a Second-Generation Immigrant Latine poet and museum educator born in Winston-Salem, North Carolina. They are currently based in Chicago, IL where they are invested in the intersections of arts learning, arts developmental work, and abolitionist policy work. They currently work as a museum educator with the Smart Museum of Art supporting their public practice team and K-12 tours on the South Side.

At the Pozen Center, Yazud supports the Lab and the Mass Incarceration Working Group’s Humans of Life Row narrative project and manages research requests from the Lab’s Think Tank at Stateville Correctional Center. They are particularly invested in the intersection between the abolition of prisons and immigrant detention centers. Informed by their experience as a FLAG (Foreign Language Acquisition Grant) scholar in Mexico (2022), they are currently developing a research project surrounding the pragmatic abolitionist practices of undocumented immigrants. 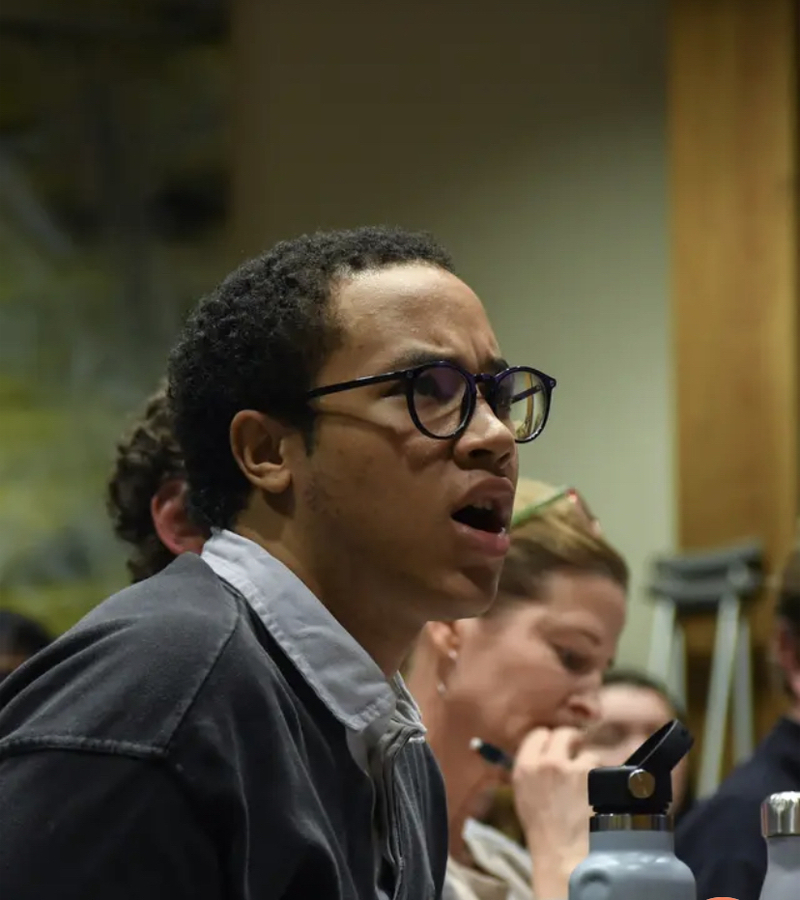 MIWG Justice Fellow | Taji Chesimet (he/him)
Taji Chesimet is a student, writer, performer, and community organizer. As a Third Year, he studies Carcerality, Policing, and Performance. Originally from Portland, OR he has been engaged in politics and community building since he was 14. He was the former Chair of the Portland-Committee on Community Engaged-Policing, appointed by the Mayor of Portland and oversaw efforts of the Department of Justice to implement police reform in the Portland Police Bureau. He was one of the Directors/Founders of the youth-run organization, Raising Justice. Taji is currently on the Board of the Restorative Justice Coalition of Oregon. He has supported the work of Parole Illinois, the ACLU of Oregon, Race Talks, Pennsylvania Innocence Project, Impact Justice, Senator Akasha-Lawrence Spence (OR D-18) and, he advised on the mayoral campaign of Sarah Iannarone. With a special interest in community education, Taji aims to work at the intersections of Performance, Decarcerality and Political Mobilization to fight for transformative justice and ending the systems of oppression impacting all of our communities. 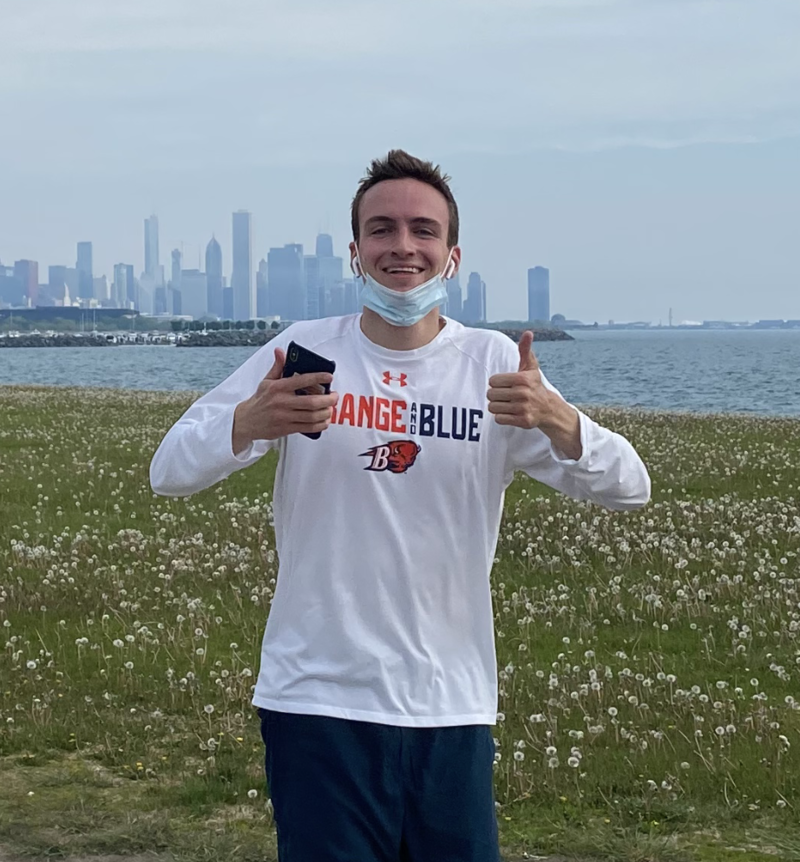 Alumni Research Fellow | Tommy Hagan (he/him)
Tommy Hagan graduated from the College in June 2021 as a Fundamentals: Issues and Texts and Philosophy double major. As part of his senior thesis in Philosophy, he examined the power relations of the carceral state and the philosophy of abolitionist praxis. On campus, he served as co-director of the Bridge Writing Workshop, which facilitates creative writing programs at Cook County Jail and IYC–St. Charles. He has worked as a Pozen intern and justice intern at the Final 5 Campaign—a coalition of activists, advocates, and system-impacted people working to close the five remaining youth prisons in Illinois. He is the 2021 Dr. Aizik Wolf Post-Baccalaureate Fellow in Human Rights. In this capacity, he works as the co-director of the Rising, Elevating, and Leading (R.E.A.L) Youth Initiative, a youth-led, peer-mentor resource hub, which addresses the trauma and PTSD of incarceration and post-incarceration community re-entry. With the Lab, Tommy has formerly served as a research assistant and community-building intern. 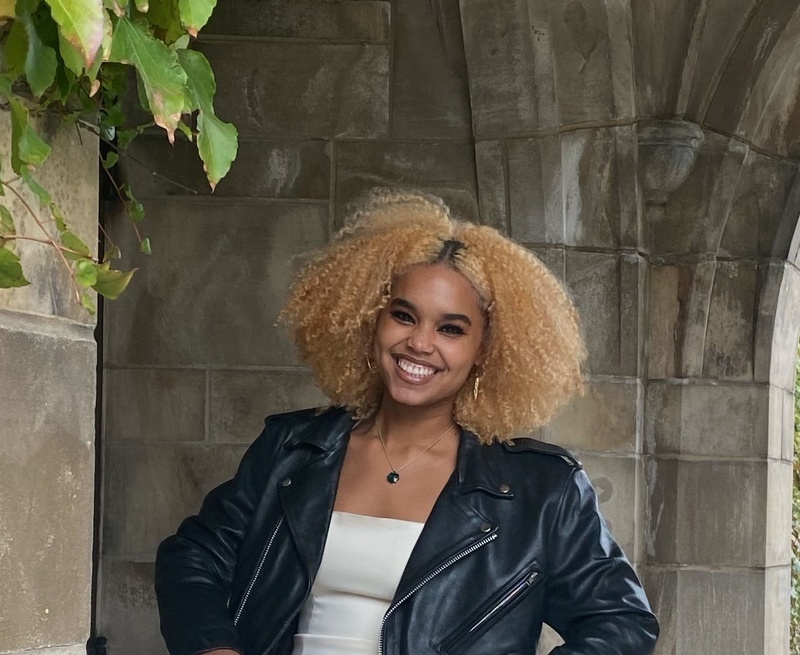 Programming, Multi-media and Marketing Assistant | Chioma Nwoye (any pronouns)
Chioma is a 4th year at the University of Chicago studying Critical Race and Ethnic Studies and Cinema Media Studies. During their time on Campus, Chioma has been involved in The Chicago Academic Achievement Program (CAAP), the Organization of Black Students (OBS), and student organizing with CareNotCops and UChicago United. Chioma hopes to attend law school following graduation so that they can aid in supporting those who have been penalized by the legal system while we work toward the horizon of a new future. Chioma is very glad to be a part of the Lab as a Mass Incarceration Working Group Fellow as we continue to learn and build the world we wish to see together. 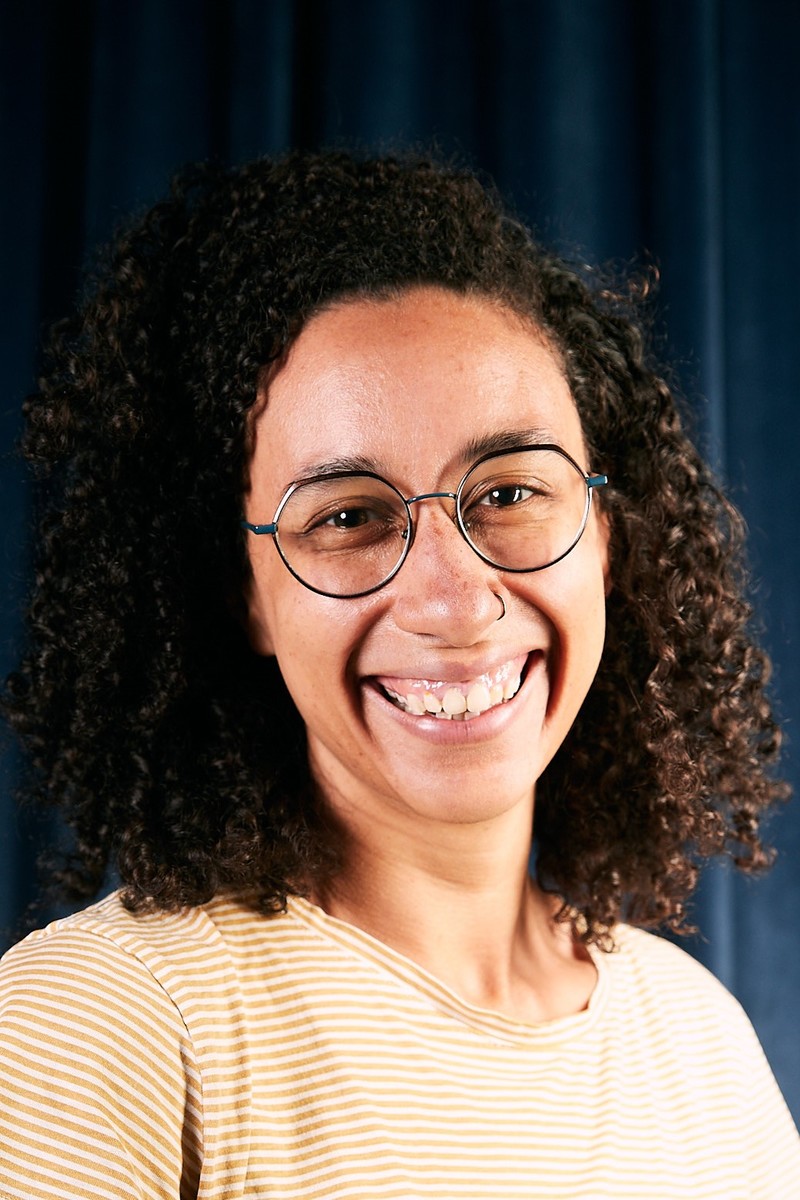 MIWG Graduate Fellow | Brianna Suslovic (she/her)
Brianna Suslovic is a PhD student at the Crown Family School of Social Work, Policy, & Practice. She studies intersections of psychiatric and carceral systems, with a focus on the role of social workers in disrupting or perpetuating harm. She has taught courses on transformative justice and abolition at University of Chicago and other institutions. She has also taught GED courses at Cook County Jail. Prior to starting her PhD, she worked as a forensic social worker in New York City. With the Human Rights Lab and Mass Incarceration Working Group, Brianna conducts research on campus-based transformative justice interventions, serves as a teaching assistant for the BA Human Rights thesis workshop, and works with a collective of Chicago-based organizers to develop education programming at Logan Women’s Prison. 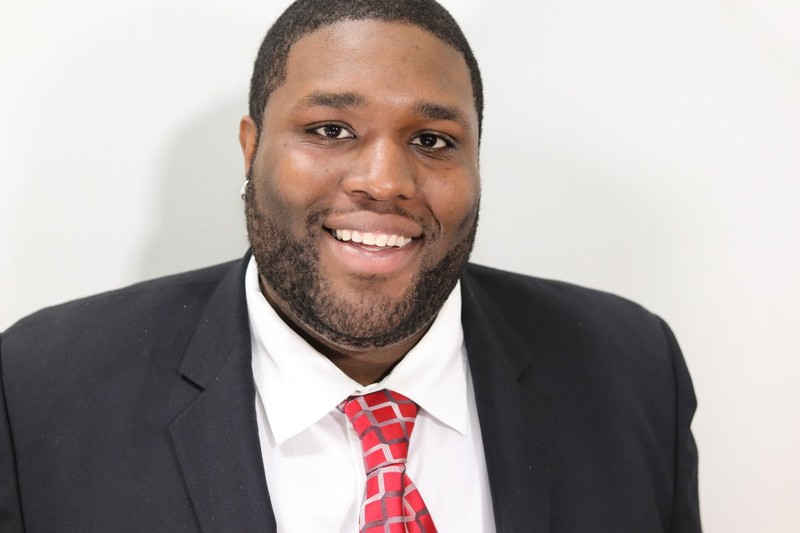 MIWG Graduate Fellow | Durrell Malik Washington Sr. (he/him)
A Native of the Bronx Durrell Malik Washington Sr. is an Abolitionist Social Worker and Ph.D. Candidate at the University of Chicago in the school of social work. His scholarship of focus lies at the intersections of Abolition, Juvenile Legal Law and Policy, Families and Networks. His dissertation study focuses on the impact of youth incarceration on Black families across the United States, specifically through the lens of siblings of formerly incarcerated young people. Durrell teaches courses related to Abolition, The Social Meaning of Race, Race Crime and Justice, and Human Behavior in the Social Environment. Durrell received his Master’s Degree in Social Work from Columbia University in 2018. 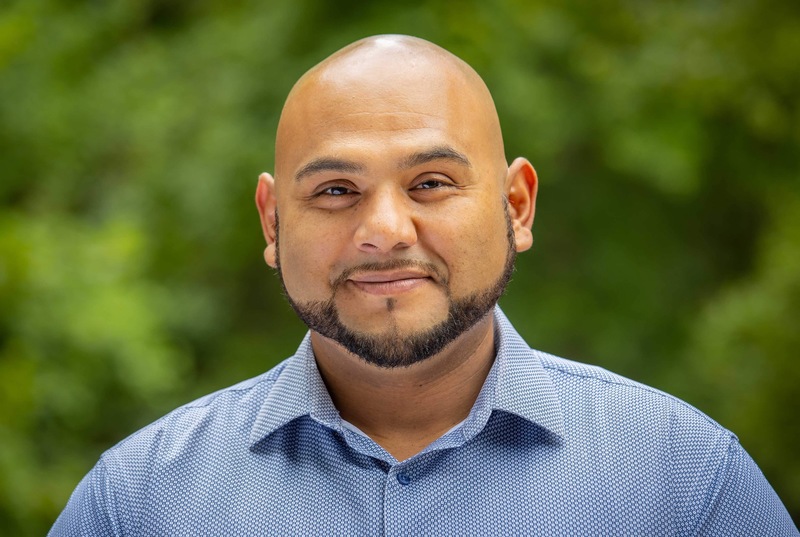 He currently serves the Office of the Lieutenant Governor Juliana Stratton's Justice, Equity, and Opportunity Initiative as the McCormick Reentry Policy Coordinator Fellow. In his previous role as Program Manager and Director of Reentry, Orlando served to build a framework for holistic reentry services that are trauma-informed and restorative at Precious Blood Ministry of Reconciliation. He is a co-founder of the People's Liberty Project, led by directly justice-impacted women and men, focused on creating spaces for healing and drafting restorative/transformative justice policy frameworks that support healing for communities and people. Orlando is a current student in the Crown Family School of Social Work, Policy, and Practice where he continues to learn how to be a better servant to the beloved community. 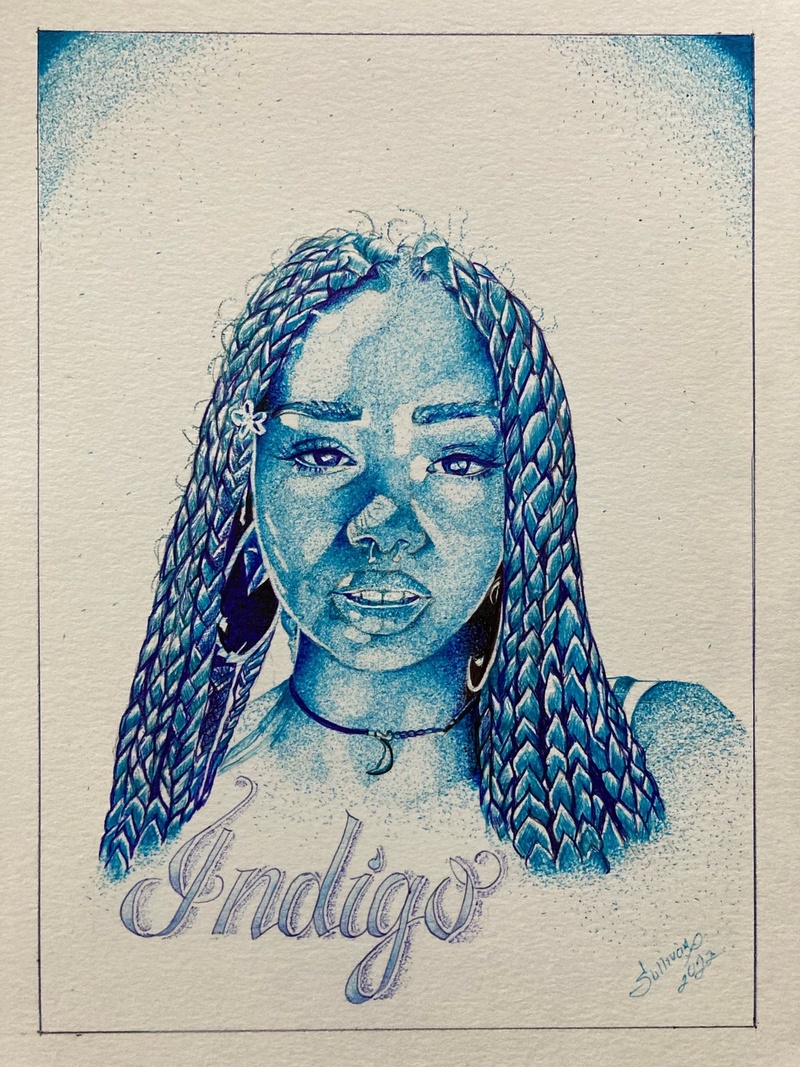 Special Projects Fellow | Indigo Wright (they/ them)
Indigo is a senior at the University of Chicago studying Critical Race and Ethnic Studies and Creative Writing. Indigo has worked as a fellow for the Pozen Center for 2.5 years and is excited for their work to continue and grow. Outside of academics, Indigo works with various community organizations such as the Prison + Neighborhood Arts/Education Project, #DefundCPD Arts & Propaganda Committee, as well as on-campus organizing spaces. They also serve as a college counselor for Black high school students through the Ron Brown Scholars Guided Pathway Support Program and as a teaching assistant in the Race, Diaspora, and Indigeneity Department. Indigo intends to pursue graduate school following their BA with the hopes of utilizing their degree to continue organizing and teaching radical politics both inside and outside prisons. Originally from South Los Angeles, Indigo hopes to impact communities both in Chicago and LA.