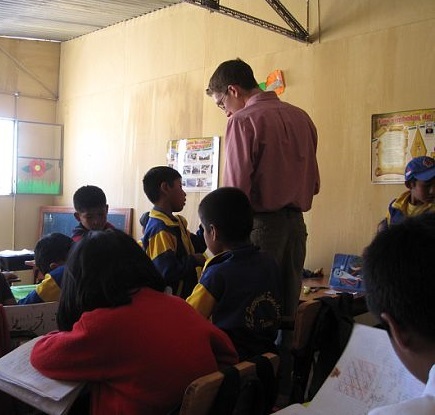 When my flight touched down in Tacna, Peru last July [2015], in some ways it felt like the four years since I had been there were but a day. The looming sand dunes that form the valley around Tacna stilled provided a desolate backdrop, the smell of the dust in the air was familiar, and the friends waiting to greet me made any nerves disappear.

At the same time, I returned to Tacna-a city where I had lived as a volunteer for over two years-with new frameworks for thinking about the local people and context. In particular, I returned with a research plan to gain a better understanding of how Peru’s legacies of violence, conflict, and human rights abuses from the 1980s and 1990s influenced the ways that the current generation of youth think about citizenship and understand human rights.

The idea for the project developed out of my experiences as a teacher in Tacna, but the particular focus on exploring what these youth thought about human rights emerged from two classes I took in my first year as a PhD student. In Human Rights III, I gained an appreciation of the history of human rights and the diversity of ways that a human rights framework can influence and reshape current political and social issues. I also benefited from appreciating and reflecting on nuances in post-conflict categories and memory that was the heart of visiting professor Eric Stover’s class on justice after mass atrocities. Together, these two experiences not only bolstered my awareness of human rights as an area of research and critical analysis, but also helped clarify how I was thinking about my own research in Peru. I began to think in terms of transitional justice, conflict and post-conflict dynamics, and human rights consciousness.

I designed my project in Peru to help expand this area of research. Using survey instruments, psychological assessments, and interviews, I investigated how youth in Tacna understood human rights, thought about their country, began to see themselves as citizens, and what they knew about the conflict and violence of their country’s past. Shortly after I arrived in Tacna, I spoke with colleagues in education to try to arrange access to schools and students across a wide swath of the city. As I expected, access to schools often rested on the whim of the director or a teacher I was in contact with, and many times, when I showed up for a planned meeting, the contacts at the schools had completely forgotten about our previous agreements. At the same time, the Peruvians I worked with were receptive to my research questions and excited to tell me about the history of nationalism in their city and what they thought about the past. All in all, after two months of fieldwork, I had collected 293 surveys and interviewed 21 students across five diverse schools in the city.

I analyzed the quantitative and qualitative data over the past year. First, I found that differing personal identity processes were related to varied ideas about human rights and citizenship. For example, some youth had begun to explore their personal identity by questioning who they are, what their role in society is, and what their parents and teachers teach them. These youth described feelings of nationalism and support for human rights that were connected to a sense of who they were, rather than simply connected to what they had been told to believe. Additionally, attitudes about civics and citizenship were linked to those about human rights, strengthening the argument for education that connects these two areas.

All in all, I believe that my research is the first successful step in supporting understandings of how to foster human rights and positive citizenship in post-conflict youth. As I further develop the findings and publicize them, this work could be utilized to help structure civic and human rights education in post-conflict settings. As I move forward in my career, I will continue to research the intersection of these two areas of development in order to support positive outcomes for youth in countries and communities across the world; from Colombia where I have ancestral roots to the southside of Chicago where the Pozen Center is based, diverse groups of youth are constructing their identities as adult citizens in social contexts that are struggling to manage violence and will be dealing with the legacies of conflict for generations to come.

Gabriel Velez is a doctoral student in social and cultural psychology within the Department of Comparative Human Development at the University of Chicago. He holds an MA in Comparative Human Development. His research interests are civic identity, citizenship, and adolescent development in conflict and post-conflict settings. He explores how youth in different settings understand human rights in order to inform initiatives and programs that foster prosocial civic outcomes and human rights consciousness in these countries.

Currently, he is working on a project involving youth understandings of the peace process in Bogota, Colombia, as a National Science Foundation Graduate Research Fellow. He is also interning over the summer of 2016 with la Fundación Ideas para la Paz in Bogota due to the generous support of the Pozen Center Human Rights Internship Program. All correspondence can be directed to gmvelez@uchicago.edu.